Recently I was talking with a fellow green roofer, talking about how energy efficient Green Roofs are and can be. The discussion was very general – no hard facts, no real data, no real “meat on the bone”. Despite all of that, however, we both pretended to know everything, in detail.

Well, for me personally (coming from an insulation company, where measuring building energy efficiency is the name of the game), this kind of discussion is really not something I like. I actually hate all of those very vague and general statements we find all over the internet, or hear at green roof conferences, events, tradeshows and similar, over and over again: “Save up to 75% in summer and up to 25% in the winter...”

When this is said – and heard – so many times, people actually start to believe these kinds of claims are “carved in stone”, even though no firm facts have ever been properly published to back up such firm statements.

As already stated a couple of blog entries back, green roofs can be good energy optimization tools for buildings. But in order to understand real performance, we need to understand what affects the real energy saving performance off a typical Green Roof building.

Participating as I do in many independent research and performance evaluations of roofs in Europe as well as in North America, I can say that green roofs, in general, improve building energy efficiency by minimizing the heat transfer through roofs.

The facts are in – can you see them?

The amount of energy transfer through buildings depends on many factors:

The results we came up with are really eye-opening. Let me just point out our 3 most critical:

To understand the influence of roof construction type on Green Roof energy performance we evaluated two identical green roofs on similarly insulated buildings in Barcelona. The only difference between the two was construction type: the first was a concrete roof, and the second a steel roof.

Results revealed that during a summer day, the steel roof performed far worse, as there is a big transfer of heat into the building during peak noon/afternoon hours, so air-conditioning systems have to be used extensively. In summer, a concrete roof with the same insulation performed as much as two times better than a similarly insulated steel roof.

Despite winter conditions that are not particularly severe, the same Green Roofs performance ratio between concrete and metal structures was also recorded in the winter.

So a factually proven statement would be: “Green roofs in Barcelona have a bigger effect on energy performance on steel roofs than on concrete roofs".

In order to gain some insight into how insulation thickness affects the performance and energy efficiency of green roofs we compared similar roof constructions, where only different insulation schemes were implemented.

We were looking at concrete roofs in Munich with different insulation thickness of 0–20 cm.

Again, the results are simply all over the place. If a concrete roof has no insulation the building will be hugely inefficient. If we add a green roof on the top of an uninsulated building, energy transfer in or out of the building can be reduced by as much as 140 kWh/m2 per year. 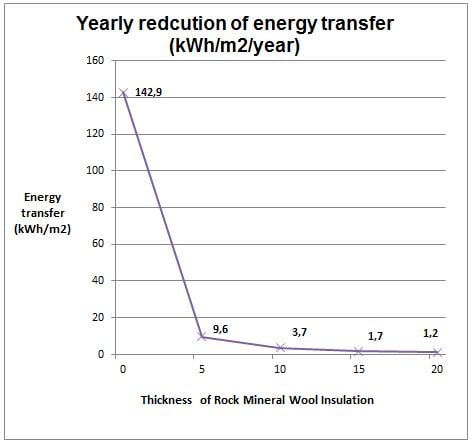 When a roof is not insulated, a green roof solution has a tremendously positive effect on the energy performance of the building. As soon as we have insulation, the performance drops significantly.

Increasing the insulation up to 20 cm would actually almost “kill” the energy performance of Green Roofs in Munich.

It is also important to know that a far greater effect is seen in Munich during the heating season than in the cooling season.

For this reason we have compared the same type of flat roof construction, including with a green roof on top, on two different locations, in Munich and in Barcelona. 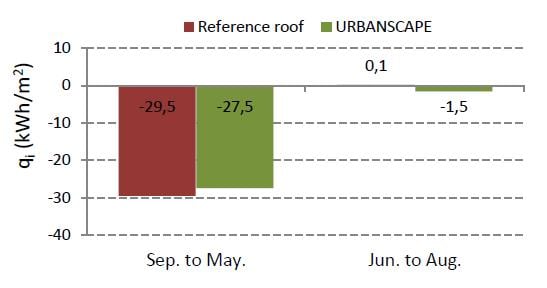 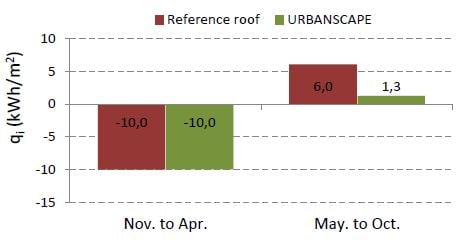 Despite the fact that on a yearly basis there was not a big difference in Green Roof Energy, performance was 25% better in Barcelona than in Munich. The biggest difference in performance was related to the seasonal effect. In Barcelona, which has a Mediterranean climate, the biggest savings were seen during the summer (cooling period), whereas in Munich, which has a Central European climate close to the Alps, savings were seen in both summer as well as in winter.

Taking all of the above into consideration, it is important to understand all the facts before going to municipalities to discuss what Green Roofs might do for the city’s overall energy efficiency. Simply pointing to a 25% reduction in winter and a 75% reduction in summer is misleading.

To learn more on this subject and green roof benefits, contact us via e-mail urbanscape@knaufionsulation.com and ask for a customized report for your city or project below.

And if you would just like to check how how the reports for specific city or country look like, download our free Sample Performance Evaluation Reports here: