Perception of green roofs in the media

The visibility of green roofs in media has a great impact on how the public views them and how appealing and realistic they appear to them as an everyday part of life. The more they appear, the more we as regular people feel comfortable with them.

It is often hard to grow past the stereotypical slanted brick roof that we all drew in kindergarten when asked to draw a house. Nevertheless, today’s world needs new solutions. Your concept of a phone has changed a lot since the early 1990’ due to technological innovation, so why not expect the same from buildings? The media has an important role to play in this case.

Green roofs in the news

When green roofs feature in mainstream news sites, it is generally due to a legislation change, like the ones in Germany or France – both countries have adopted standards that require certain buildings to have green roofs. More frequently, they turn up in the science and technology sections, which makes them more attractive to a particular, tech-savvy reader than the “average Joe”.

Reactions to media coverage of green roof legislation are mostly extremely positive and show that the public regards them as a beneficial type of technology that hardly ever invokes any negative comments. They are a symbol of advancement, as well as returning to nature and embracing ecological notions without sacrificing progress. It has become increasingly clear that green technologies are an important part of climate change mitigation for communities that face increasingly extreme weather events, like droughts and floods. With forest fires, raging on various locations, water conservation and ecological preservation has become a widely accepted topic of discussion.

The only negative part is the implementation – as with many large-scale changes, not all our roofs can be changed at once and sometimes there is frustration at the seemingly sluggish pace of incorporating green roofs into our cities, despite the clear benefits and the effort of legislators.

Rather than in the context of legislation implementation, green roofs hardly ever make front-page news. They appear more regularly in media when a particularly large green roof public project is planned or unveiled. Other than that, the coverage is limited to eco-themed publishing and personal blogs, particularly those that deal with lifestyle.

Green roof as a symbol of lifestyle and personal values

With many people recognising the seriousness of climate change, biodiversity loss and other environmental problems, green roofs have also become a symbol of a particular lifestyle. Sustainability has become an important part of many people’s lives. They wish to honour that in their homes (an on their social media profiles), weather they live in a rural or an urban setting. Investing in a green roof in your home tells of an eco-friendly mentality and people with those sort of values like to show off their green roofs and other green technologies online. 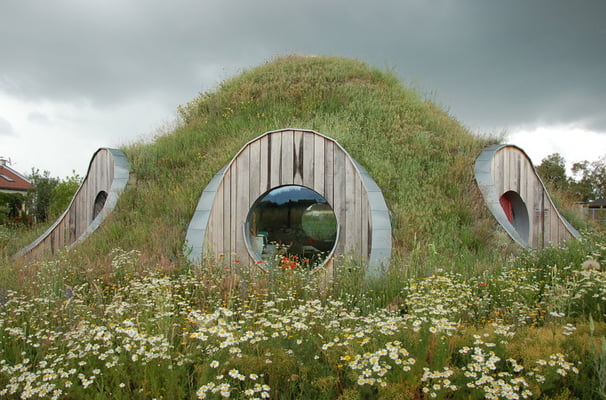 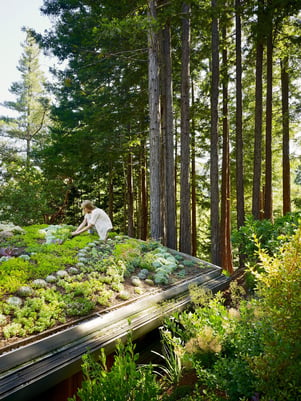 The new wave of more advanced extensive green roofs has also attracted a new type of consumer – rather than the “hippie” type, these slimmer and lighter green roofs are more attractive to the Instagram using, blogging, techy and gadget-loving generation. Therefore, installing or choosing to spend time in a building with a green roof is more than a technical solution – it is a statement of lifestyle. 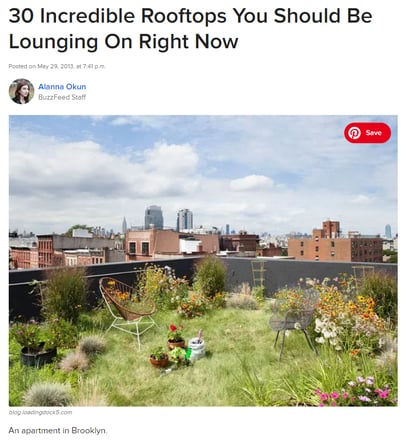 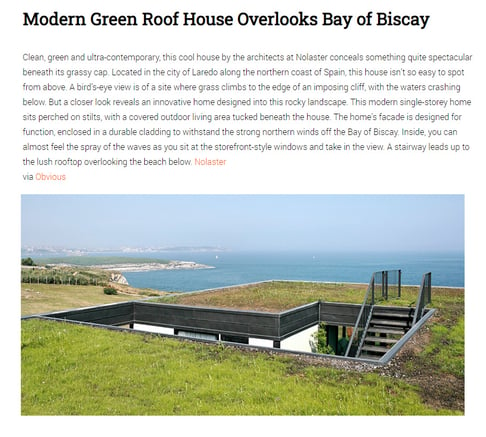 The representation of green roofs in the film industry has been researched by author Charlotte Neilson: “Green roofs and other architectural green spaces have been popping up regularly in mainstream movies over the past decade. Blockbusters including The Vow (2012) and Source Code (2011) utilised the greenscape outside Gehry's Jay Pritzker Pavilion in Millennium Park. Last year the Vancouver Convention Centre was featured in both Godzilla and Robocop, and Kaspar Schroder’s 2009 uber cool documentary My Playground, about the sport of parkour features BIG’s Mountain Dwellings in Copenhagen”, she explains, and adds “Positive film treatments are important because film is such a powerful medium for influencing our desires. Film shapes our individual dreams and therefore our collective goals.”

The most well-known appearance of green roofs in film was in the movie franchise Lord of the Rings, where they feature as an essential part of buildings in Hobbiton. The association with Hobbits has affected the image of the green roof as a part of a peaceful and idyllic community, yet this has reinforced the stereotypes of green initiatives as hippy communities. Nevertheless, according to the author, the image is clearly positive and benevolent, unlike many portrayals of architecture in movies. The green roofs of the Shire will always be associated with the salvation of Middle Earth. They invoke simplicity, a dialogue with nature and respect for the environment.

Photo 7: Lord of the Rings_Bilbo_Baggins_Residence

Neilson also makes an excellent point about green roofs as a possible public space, explaining that Schroder’s use of the Mountain Dwellings is a particularly good example because it not only makes contemporary green design desirable, but also accessible. Parkour is all about taking ownership of public spaces, being confident enough in a space to use it as a personal gym - defying convention as well as gravity.

Moreover, what can be more important for promoting green roofs than an open mind for defying convention in order to embrace new, better and greener solutions?

Charlotte Neilson - Through the Lens: The Social Implications of Green Roofs in Film https://www.archdaily.com/587017/through-the-lens-the-social-implications-of-green-roofs-in-film

BuzzFeed - 30 Incredible Rooftops You Should Be Lounging On Right Now http://www.buzzfeed.com/alannaokun/rooftops-you-should-be-lounging-on-right-now

CNN - Green roofs are sprouting up on buses https://edition.cnn.com/2019/06/03/health/green-roofs-singapore-buses-intl/index.html

The Independent - Green roofs can vastly improve city life, so why don’t we see more of them? https://www.independent.co.uk/environment/green-roofs-plants-city-wildlife-environment-health-a9150546.html