Posted by Neva Rozman on Nov 11, 2021 11:16:39 AM
Research project on Urbanscape® Green Roof Systems in the Mediterranean climate

During the course of the two-year research project, different Urbanscape® Green Roof Systems were examined by academic research groups from University of Lleida, Spain. The main objective of this experimental research was to test the performance of Urbanscape® systems in the Mediterranean climate, where we also tested the quality of water run-off from the test Urbanscape® Green Roofs. Seven test green roofs with detailed monitoring equipment were installed in the Arboretum Botanica Garden in Lleida and examined during 2019 and 2020.

Urbanscape® is an innovative, lightweight and easy-to-install green roof system with high water retention capacity. Urbanscape® Green Roof is a complete system consisting of a root membrane, a drainage system with or without buffer, a substrate – a unique patented rock mineral wool substrate – and a vegetation layer (usually sedum blanket). The irrigation system shall be provided depending on the local climate conditions. 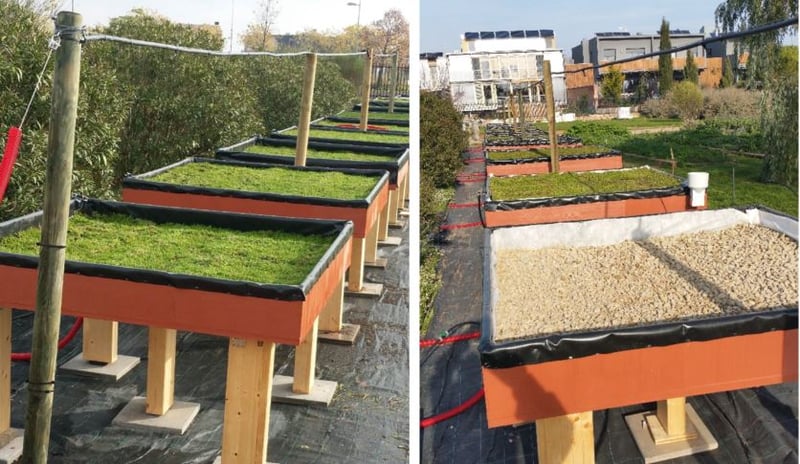 Evaluation of the dynamics of green roof run-off water quality was monitored from all test green roofs during the two-year observation. For this purpose, samples of run-off water before and after the irrigation or rain events were picked up to conduct the proper analysis of the leachates. After the scientific literature search, hypotheses were made about the causes that may affect water run-off quality. The expected variations in water run-off quality could be due to different factors, such as depositions from the atmosphere and other living matter, maintenance activities (e.g. fertilisation and usage of pesticides) and product characteristics. According to previous research and standards for water quality assessment, the main physico-chemical parameters were analysed: pH, electrical conductivity, organic and inorganic matter, N, P, K and different chemical elements in the water run-offs. The results were compared to the limit values from European Union Directives, WHO regulations and EPA regulations.

Samples of run-off water leachates were collected 9 times. All the results from Urbanscape® Green Roof Systems were compared to the typical green roof system called the pozzolana-based system and the ballasted gravel system, as well as against different regulations as described above.

The results showed that after the first flush as well as on average during the investigated period, Urbanscape® Green Roof systems showed very good results – performing even better than pozzolana and ballasted gravel systems. All the average values of Urbanscape® systems were placed within, even much lower in some parameters, the limits set by water quality regulations. Urbanscape systems showed lower leachates of most metals than the pozzolana and gravel systems.

The results showed that Urbanscape® systems without any additional layer of substrate or soil performed better than those with an extra substrate layer, as well as better than pozzolana and gravel systems, keeping leachate levels within the set limits in regulations. We discovered that the extra layer of substrate was the cause of the large amount of leachate in most parameters during the first flush.

During the study of the evolution of water run-off, the analyses showed the good impact of Urbanscape® Green Roofs on the quality of run-offs, and therefore reducing the impact of pollutants in the water run-offs.