Water damage caused by flooding is becoming a serious threat in the developed world. Caused both by extreme weather phenomena due to climate change, and by expanding cities, it is crucial to invest in prevention methods.

Surface water management is important as cities grow and more areas - rooftops, driveways, roads, car parking, and footpaths - are covered by impervious materials. This obstructs water from being absorbed into the soil and keeps it on the surface. As explained by professor Rebecca Wade from Abertay University: »That means water gets onto the roads and into drains more quickly, bypassing some aspects of the natural hydrological cycle« (1).

It is therefore worth looking at some of the ways we can better manage this excess water.

According to data, 2017 has been one of the wettest years on record. For instance - Malin Head, in the north-west of Britain, broke the record for the wettest summer day in 62 years when 77.2mms of rain fell on August 22 - including 63mm which fell over only a six-hour period, as reported by The Independent (2). Europe also experienced extreme weather in the beginning of 2018, with a powerful storm that brought strong winds and heavy rain to Ireland, UK, Germany, France, Switzerland, Austria and Italy. Trends have been showing an increase in such phenomena all around the world. Extreme weather tends to shock communities with threats to public safety, transport, energy and health. It poses a challenge to infrastructure, causing serious and costly damage.(3)

With rapid rainfall and large volumes of water entering the drainage systems in short periods of time, it has become clear that sewer systems tend to fail when faced with unpredictable weather and large amounts of runoff. This is a problem for many urban areas on a global scale, and needs to be approached systematically. One of the best options is the implementation of SUDS – Sustainable Urban Drainage Systems that aim to manage and restrain access water. So where do green roofs play a role in this system?

SUDS are an approach that aims to manage rainwater naturally. They are a sequence of techniques that form a management method for controlling the flow velocity of surface water, filtering and removing pollutants in the process.

The elements required to form a Sustainable Urban Drainage System are comprised of methods that decrease the volume of water entering the drainage network by means of interception of run-off water. Here's where green roofs come in - the absorbent layers accommodate water storage and subsequent evapotranspiration. In short, a green roof holds in access water and releases it back into the air by drying naturally. The next element is pre-treatment through vegetation that captures pollutants from surface water before releasing it back into the system - also provided by the green roof, but other vegetation can be added to the system, such as vegetated ditches on the ground. Retention systems delay the discharge of surface water to watercourses to prevent overflows. Infiltration systems, such as trenches and soakaways, allow water to soak water back into the ground naturally and at a more predictable pace. (4)

The system aims to catch and slow down the flow of water, improve the quality of water by capturing and treating the pollutants it contains, and benefiting the local community by expanding the green surface areas (1).

Green roofs as a flood-prevention tool for cities

According to GRIT Lab at the University of Toronto, green roofs are a green infrastructure (GI) option that can be applied to virtually any rooftop given weight load capacity. As explained by the researchers, their testing has shown that »Green roofs have the capacity to capture up to 70 percent of rainfall over a given time, relieving underground stormwater systems and releasing the rain water back into the atmosphere.« (5) Researchers at Penn University In Pennsylvania have come up with a slightly lower percentage, 50 to 60% of the rain falling on a green roof will be captured and evapotranspired back to the atmosphere, thus never entering the stormwater system. (6) This of course depends on the overall context, climate and build of the green roof in question, but it is safe to conclude that green roofs have a very significant impact, relieving more than half the volume of stormwater stress on drainage systems. 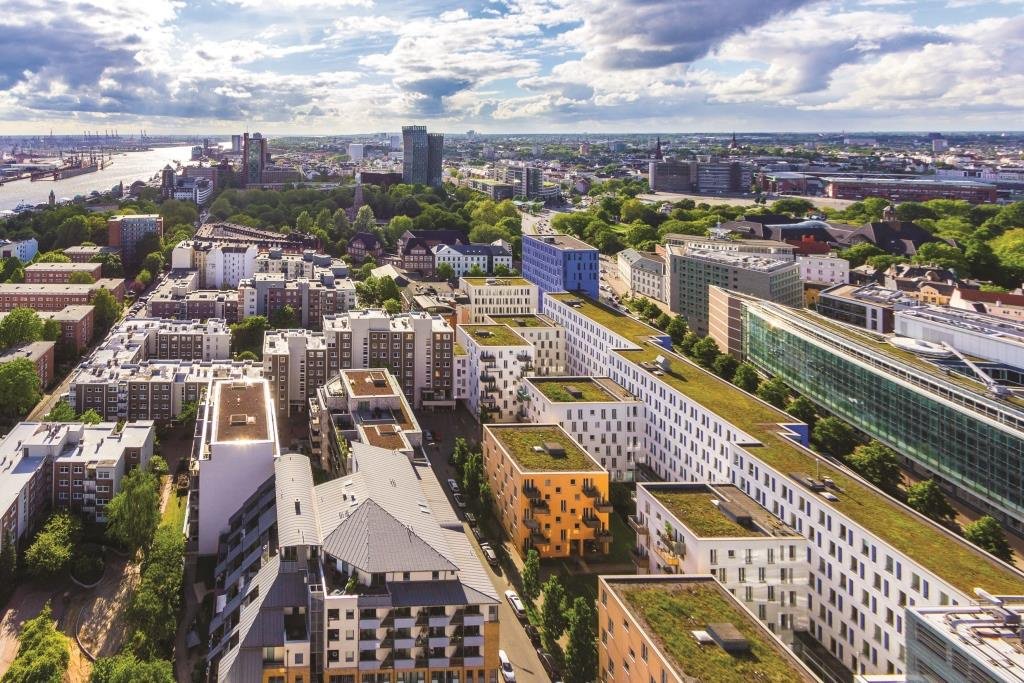 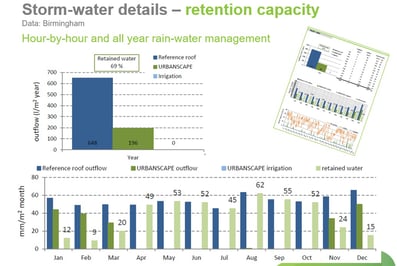 Our system's advantage in stormwater management when compared to similar products is its great water retention capacity – the Urbanscape® Green Roof system weighs about 20 kg per sqm when dry, and between 40 and 70 kg per sqm when fully saturated with water. It is therefore 3 to 4 times more absorbent than other green roof systems and about 8 to 10 times lighter.

This makes it perfect for both residential, non-residential and industrial buildings in urban areas. Extremely lightweight and easy to install, our Urbanscape® Green Roof System products are also ideal when dealing with existing infrastructure.