URBAN LANDSCAPING – Why greener cities are cooler, smarter and healthier

A recent study of Glasgow by researchers Emmanuel and Loconsole advocated that an increase in greenspace of 20% above the current level could eliminate between a third and a half of the city's expected urban heat island effect in 2050. (1) But why do we need to take action in the first place, even in cooler climates, like Glasgow? Let us look at the main challenges of urban environments today.

Our cities are heating up

Urban heat waves first appeared with rise of industrialization and urbanization. In the early 19th century, a researcher named Howard compared urban heat in London and reported that the average annual temperature over a 20-year average is 2,5 degrees higher in London than in the surrounding countryside. (2)

The main characteristics of urban heat waves today involve higher temperatures in urban built environments in the range from 2°C to 12°C. (3) The phenomenon is linked to hard surfaces in cities (such as asphalt and concrete) that typically absorb more solar radiation and thus tend to overheat. There is also less vegetation and bodies of water than in rural areas.(1)

Another reason for urban heat waves is urban metabolism – the energy consumption that contributes to waste heat production. Apart from traffic, the main culprit is indoor air-conditioning which results in access heat and in turn encourages a vicious cycle of even more intense air-conditioning. The causes can therefore be attributed both to the thermal mass of the built environment and human generated heat. (2)

Our cities are flooding more frequently

Heavy downpours have increased in frequency and intensity worldwide in the last 50 years and the 100-year floodplain is projected to increase 45 percent by the year 2100. This poses many risks to the urban population, as the rainwater carries trash, bacteria, heavy metals, and other pollutants from the urban landscape. Other risks include erosion, damaging habitat, property, and infrastructure. (4).

Our cities are polluted

The pollutants from our ever-expanding energy consumption (such as sulfur dioxide, nitrogen oxides, particulate matter, carbon monoxide and mercury) contribute to the formation of smog, fine particulate matter, and acid rain. Emissions of greenhouse gases (such as carbon dioxide) are causing global climate change, and with elevated temperatures, the risk of smog formation further increases, as nitrogen oxides and volatile organic compounds react in the presence of sunlight and hot weather.

All of the above-mentioned problems do not only bring discomfort, but can also seriously compromise human health – mainly when it comes to children or the elderly, causing many diseases and premature deaths resulting from heat stress or air pollution. (4)

Green infrastructure is a term that includes various solutions that help us mitigate the specific environmental problems found in urban environments. It can be implemented in the form of street features, building features and landscape features.

Permeable pavements, unlike asphalt and concrete, allow air and water to pass through, reducing runoff problems and providing cooling properties due to evaporation and reduced heat storage. They can be installed in the form of grass pavers, gravel pavers or other porous forms, laid on top of a stabilization system in the form of a plastic grid. This can be used on sidewalks, parking lots, alleys and streets.

Rain gardens are designed to reduce stormwater runoff through infiltration or storage in the events of heavy downpours. They can also be incorporated into the larger streetscape with other techniques, reducing temperatures, providing wildlife habitat and improving the overall aesthetics of urban environments.

Green roofs and walls help keep buildings cool with the help of natural evapotranspiration and thus reduce the transfer of heat to the surrounding atmosphere. They also help manage stormwater, containing and releasing it slowly, decrease energy usage for cooling, improve air and water quality by filtering pollutants and consuming CO2. They do not have as great a cooling effect on city air temperatures as ground-level vegetation does, but they have the advantage of not taking up additional land and of keeping building occupants cooler, reducing the need for air-conditioning. (5) 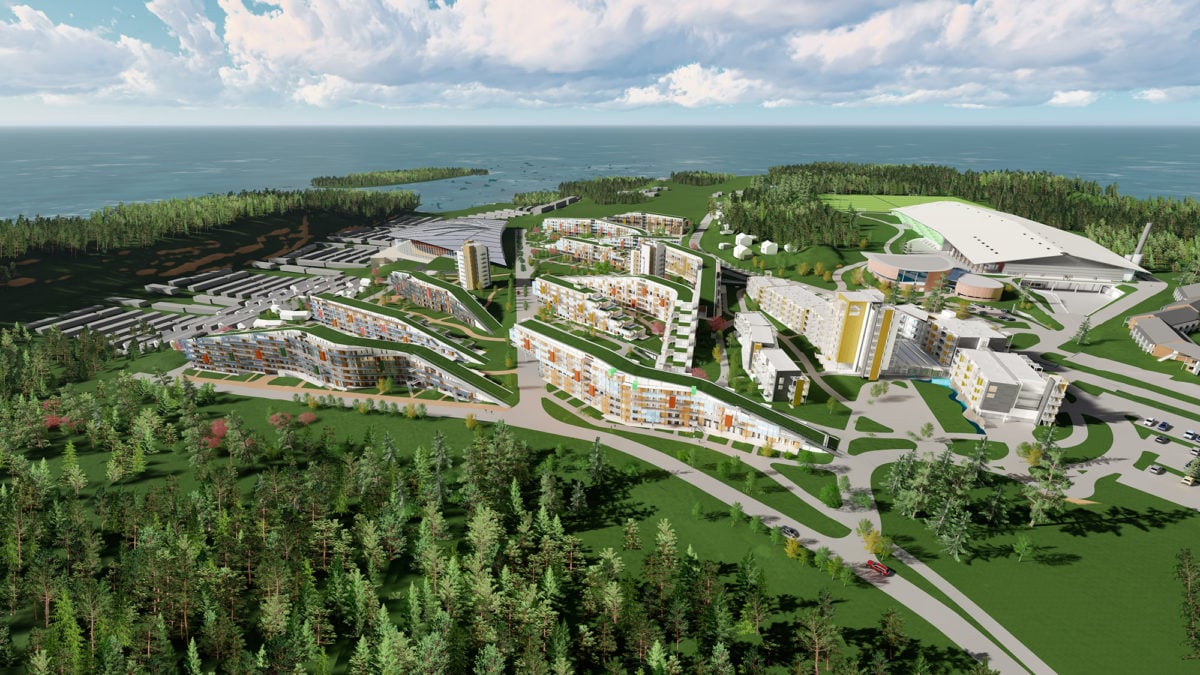 Can cities save money with green technologies?

Of course, the data cannot be applied to all municipalities equally due to different climatic conditions, city geometry and other factors. Nevertheless, data consistently shows that an investment in green technologies produces savings for communities.

Our solutions can be used to construct any of the above-mentioned green features. All products boast a lightweight structure and superior water retention qualities.

Urbanscape® Green Roof System is 8-10 times lighter than other green roof substrates and can hold up to 3-4 times more water per its volume.

Urbanscape® Landscaping Systems improve root growth, reduces the need for watering in dry areas and controls runoff. A mere 1m2 of our product just 2 cm thick absorbs a whole 17 liters of rainwater. Depending on the local climate and the weather / season, water savings of up to 75 % can be achieved.

Urbanscape® Green Designs on the Move™ is an innovative conceptual vegetated design scheme which can be implemented on vehicles or which can turn the usual ”grey” surfaces of highways and railways tracks to green surfaces.

Urbanscape® Stabilization Systems are designed to provide a strong and stable structural layer for grass or gravel on paths, driveways and parking lots for cars or even heavy trucks and buses. They can be used as a replacement for asphalt and concrete surfaces.

More information can be found on our website www.urbanscape-architecture.com or in our Urbanscape brochures. A lot of useful ideas can also be found in our Urban Smart Green Magazine, focusing on green roofs and the benefits green infrastruction brings to the society.