What's better than one green roof? Several green roofs, in fact. Installing them throughout the urban landscape is more effective in terms of enhancing their various environmental and social benefits than having just a single project. The number and total area of green roofs can work to optimise the environmental and psychological benefits they supply. This is why we should make more effort into procuring funds for green roof installation as a collective.

As explained by researchers Netusil et. al. (2022), numerous studies have estimated the private benefits to the owners and residents of buildings with green roofs, while the multiple public benefits received by the surrounding community are less well known (1). Collectively, green roofs might also influence the cities beyond the building scale (2). These benefits include reduced combined sewer overflows, reduced urban heat island effects, and an increase in pollinators such as birds, bees and butterflies (1). The building-scale impacts of green roofs on natural and technical systems are relatively well understood, however, the influence of green roofs on socio-cultural systems, although evident, is still under-represented in research(2).

Urban nature has been shown to reduce stress and lift negative moods, provide better attention control and a renewed sense of vitality. Broader outcomes even indicate overall improved mental and physical health, reduced aggression and crime, improved productivity and creativity, and increased helping behaviours. Similarly, aesthetic experiences, such as looking upon a nicely overgrown green roof, are associated with reduced rumination and even a greater likelihood of helping others (2). An interesting study compared the effects of 40-second microbreaks spent viewing two different city scenes on 150 university students' sustained attention. Microbreaks are short, informal breaks taken throughout the day that last less than several minutes. Participants who briefly viewed the green roof reported feeling more restorative effects, made fewer errors and showed more consistent task responses compared to participants who viewed a concrete roof - they showed worsening attention throughout the task (3). Other studies have shown that viewing a green roof can reduce perceived effort and consequently improve performance on work tasks, and green roof visitors in Canada and Finland report positive aesthetic and restorative experiences (2).

How Green Spaces Affect the Mind

Living and working in busy, overcrowded and information-rich cities can drain mental resources for controlling attention on tasks while trying to block out external distractions. In contrast, views of nature are processed effortlessly and can promote relaxation. Nature gently captures attention and fills us with fascination, reducing demands on our limited mental resources. Obviously, relaxing between demanding tasks is important, but employees facing high demands may sometimes need to skip scheduled work breaks. In these cases, taking frequent micro-break views of a green roof could help employees top up their attention as it becomes depleted in the workplace (3).

Most of the research into the restorative potential of nature in cities focused largely on parks which may not be visible from many points around the city. People living and working in high-rise city buildings may instead be provided have views of city vegetation such as green roofs. In that way, we could help boost attention for large numbers of employees overlooking just one green roof. On a larger scale, this could benefit thousands of workers (3). 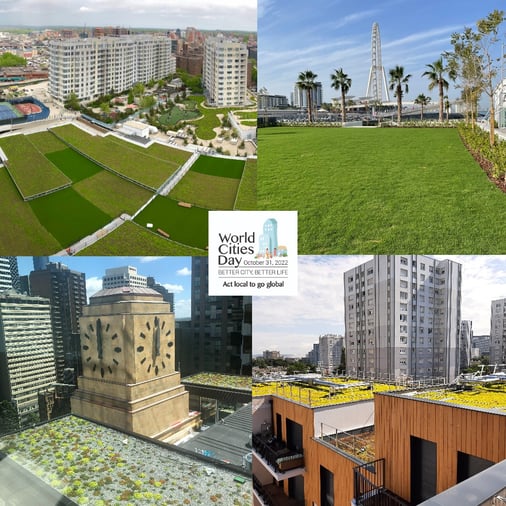 Investing in one green roof can be done by a single individual, organisation or company. However, organised efforts to green several roofs require collective consensus and solid funding schemes. A study in Portland, directed toward inhabitants, proposed a green roof program that would result in 75 new green roofs on commercial and industrial properties representing an additional 500,000 square feet (cca. 46.500 square meters) of new green roofs, a 50% increase from current levels. Survey respondents were told that to fund the program, they would see an increase in their sewer and stormwater bills for one year and the new green roofs would be installed one year after the program was fully funded. The most significant motivator for the survey participants was a reduction in combined sewer overflows that could be achieved by green roof installation (1).

The average single-family sewer and stormwater bill for Portland residents during 2019–2020 was $908.26 per year. The one-year household total willingness to pay for the green roof program represented from 22% (lowest effects program) to 49% (highest effects program) of the average sewer and stormwater bill, therefore from around $202 to $442. At the city level, the total willingness to pay was $54.4 to $116.8 million. This level of support would more than double the number of green roofs on commercial and industrial properties in the study area! The public benefits from the new green roofs, however, would provide cost reductions throughout the 40-year lifecycle of a green roof. As noted by Netusil et. al. (2022) this can help policymakers understand the public benefits from green roofs, their relative value, and citizens’ total willingness to pay to support investments in this green stormwater infrastructure approach (1).

In conclusion, collective green roof initiatives have the potential to improve the wider urban landscape and give us healthier cities that are more efficient at responding to climate change. At the same time, they can help improve our mental well-being and give us a brief, calming respite from our busy lives, boosting overall life quality in cities.