What is happening with biodiversity and nature?

Increasing development of urban environments and infrastructure put pressure on green spaces with potential negative impacts on biodiversity and ecosystem services. Natural spaces and habitats are disappearing, partly as a result of climate change and human behaviour, which ultimately contributes to the decline of biodiversity.

Much of the Earth’s arable lands are already used in agriculture, millions of acres of tropical forest are cleared each year, atmospheric CO2 levels are at their highest concentrations in more than 3 million years, and the climates is erratically and steadily changing, triggering unprecedented droughts, fires, and floods across continents. Indeed, most biologists agree that the world has entered its sixth mass extinction event (Wagner at al., 2021). 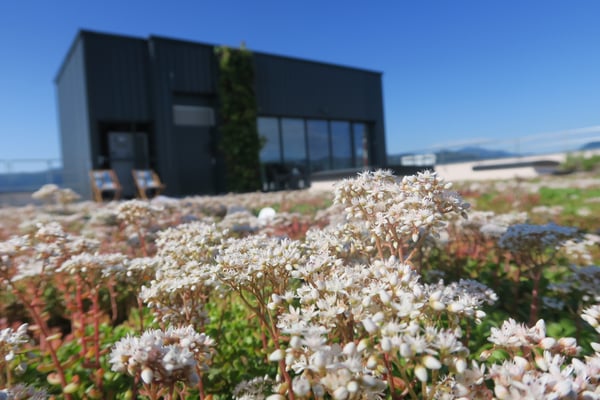 What is biodiversity and why does it matter?

The term "biodiversity" indicates the diverse biological species, interactions of species within an ecosystem, and natural processes, as well as the diversity within species. There are, however, specific benefits to and from the biodiversity that affect living on this planet (Argent, 2018).

Many studies suggest that biodiversity may be particularly important for ecosystem multifunctionality, because different species can contribute to different functions (Wagner et al., 2021). Biodiversity has a decisive impact on the Earth's environment, provides many ecosystem services (e.g. oxygen production, air and water purification, flood and drought mitigation, soil fertility, pollination, food security, is a source of materials, energy and various medicinal substances, spending free-time in nature, ...). Biodiversity is critically important to human health, economies and livelihoods.

Biodiversity ensures health and food security. Insect pollinators provide a crucial ecosystem service; however, they are under threat. This is a serious cause for concern because pollinators are an integral part of healthy ecosystems. Without them, many plant species would decline and eventually disappear along with the organisms that depend on them, which would have serious ecological, social and economic implications (NIB, 2019). In numbers, biodiversity benefits can add up to billions. Pollinators have a vital role in agriculture – they are instrumental in 35% of global crop production (Willige, 2019). The net worth of insect pollination is estimated to be around 10% of total worth of agricultural production. That adds up to around €153 billion globally and up to €22 billion in Europe every year. (Helmholtz Association of German Research Centres, 2008)

There is growing evidence that green infrastructure, including green roofs and walls, can contribute to mitigating the loss of biodiversity.

Green infrastructure can improve the natural conditions needed to sustain thriving pollinator habitats. Green infrastructure is contributing to biodiversity as it provides nature-based solutions, and revitalises urban and industrial areas. Green roofs and green walls act as refuge habitats for numerous arthropod species and allow them to move and disperse within urbanised areas. Together with other green surfaces, such as parks and gardens and by connecting to natural and semi-natural areas in the countryside, they support a network of pollinator habitats in the wider landscape (Bevk, 2021).

Green Solutions has performed a study on pollinators on Urbanscape Green Roof together with the Slovenian National Institute of Biology (NIB), where two Urbanscape® Green roofs, located in industrial and urban areas, were monitored. 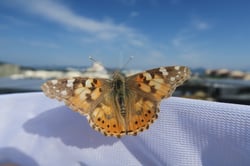 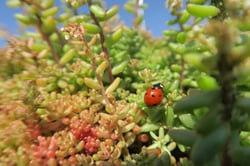 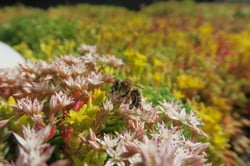 URBANSCAPE® GREEN ROOF SYSTEM is a complete, lightweight and easy to install system with a high water retention capacity designed for green roofs on residential, non-residential and industrial buildings and urban areas. They are designed not only to bring back the natural element in the urban environment but also to provide solutions for important issues such as urban heat island effect and stormwater management. Urbanscape® green roof system is always made up of 3 core elements (from top to bottom): Pre-grown Vegetation Blanket, Urbanscape® Green Roll Multipurpose Growing Media and Drainage. Systems can be easily modified and adapted to specific climates by combining different layer types (and thicknesses).

Results show the high importance of green infrastructure for biodiversity and also for pollinators. It shows that green roofs are important not only for domesticated honeybee or beekeeping but also from the perspective of nature and biodiversity conservation. A wide range of insects were found as well, including wild bees, hoverflies, butterflies, ladybirds, etc. The densities of pollinators were surprisingly high. The highest recorded density of pollinators investigated was 11 pollinators per m2, calculated on a typical private green roof that adds up 2,750 pollinators on a small private green roof, and calculated on our biggest Green Roof on a commercial building in France it adds up of almost 92,000 pollinators on a green roof – 5 small bee families (Bevk, 2021).