Green roofs are acknowledged as a premier example of multifunctional urban design. Wherever buildings are constructed, microhabitats are usually disrupted. The architects had adopted the philosophy of "footprint replacement," whereby green space lost through development is re-established on the roof (Grant, 2006).

More green roofs are our aim… So is a diverse planting and local / native plants correct approach for every roof?

There are many initiatives which promote the usage of more diverse plant communities also on the green roof (native plants, enjoy lawn spaces, growing food on the roof), which is to a certain extent possible on some very carefully, designed green roofs with demanding set up and maintenance.

Such approach clearly demands more from design phase, more specialist knowledge, deeper growing medium, while maintenance requires more labour, resources and expertise on a longer term. The designer has to be fully aware of the implications of this kind of approach and needs to make the client aware as well. Everyone involved in such project should be clear that this is a pioneering, not proven, work (McIntyre, Snodgrass, 2010).

Planting native plants can in some situations be done successfully. But selecting and obtaining the right plants can be difficult and time consuming. Often, even if such plants are properly identified and available in the marketplace, they struggle in the harsh conditions on the roof. Even in a garden at grade, using native plants to improve ecological function and provide habitat, it is not simply a matter of choosing a few natives and adding them to the plant list. Restoration ecology requires scientific expertise and knowledge of horticulture, biology, soil science, climate, hydrology and how the characteristics on a site interact. On a roof, there is nothing to restore (McIntyre, Snodgrass, 2010).

What extensive green roofs should be and what they do for urban habitat?

Vegetation on green roofs must be adapted to the harsh environment on the roof. Extensive green roofs usually have thin, coarse mineral-based growing medium and are planted primarily with sedums and other tough, drought-resistant, low growing plants. Such plants are in most cases commercially available, easy to install and likely to survive if given the proper attention during the establishment period. Plants will spread and provide the vegetated cover necessary for optimal roof performance.

6 facts why Sedums are so appropriate?

1. Climate adaptable:
Many Sedum species are found in the northern hemisphere and particularly in the Mediterranean, but also in North Africa and South America, for instance, where Sedum is often found in dry and/or cold areas where water can be scarce. Sedum can store water in its leaves and is able to endure varying weather conditions (from -25°C and up to 40°C).

2. Low growing media requirement:
Sedum has very shallow roots, which is necessary when the thickness of the growing media is limited, which is always the case on extensive green roofs. Suitability of low-growing Sedum species for use in extensive green roofs has been confirmed because of their superior survival in substrate layers as thin as 2 to 3 cm (Van Woert et al. 2005).

3. Modified metabolism:
At night sedum absorbs carbon dioxide and turns it into malic acid, which is used during the day for photosynthesis. The pores in the leaves only open at night, to minimize the loss of moisture during the hot, dry day.

4. High disease tolerant:
There is also little or no incidence of disease or insect infestation in Sedum.

5. Low water requirement:
Sedum is drought resistant and requires relatively little nourishment and maintenance as compared to other types of plants. While other species die from drought, Sedum is able to survive by adjusting its metabolism and saving on water supply. Sedum can recover very quickly as soon as it receives some moisture. 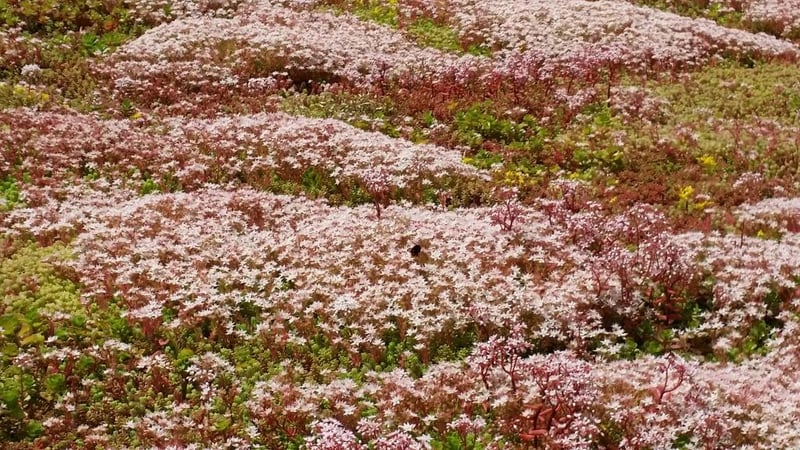 Not only do many Sedum species tolerate drought conditions, they also have strong persistent qualities. In Germany, different types of green roof constructions were tested and found that Sedum Album was a dominant persistence species for all types of construction tested, followed closely by Sedum Sexangulare (tasteless stonecrop). Also, 100% survival of several Sedum species during the course of 3 years when grown on roof platforms was reported (cited by Getter and Rowe, 2006).

6. Low maintenance requirement:
As Sedum is able to survive by adjusting its metabolism saving on water, this means that it also saves a lot on the food side. In general adding nutrients once per year is sufficient, but adding it 2 times, the Sedum will flourish.

Sedum Green roof is not always green in color

By having several sedum species in the blanket, this enables vegetation coverage through various seasons, and consequently the overall visual impression changes with the season. Many species have dormant periods during which the green roof may not appear so ‘‘green.’’

Asortiment on Urbanscape green roofs can contain up to 12 species over time. In first two years, evergreen sedums dominate, while in later stage, big-leaf sedums grow and mature during the time. 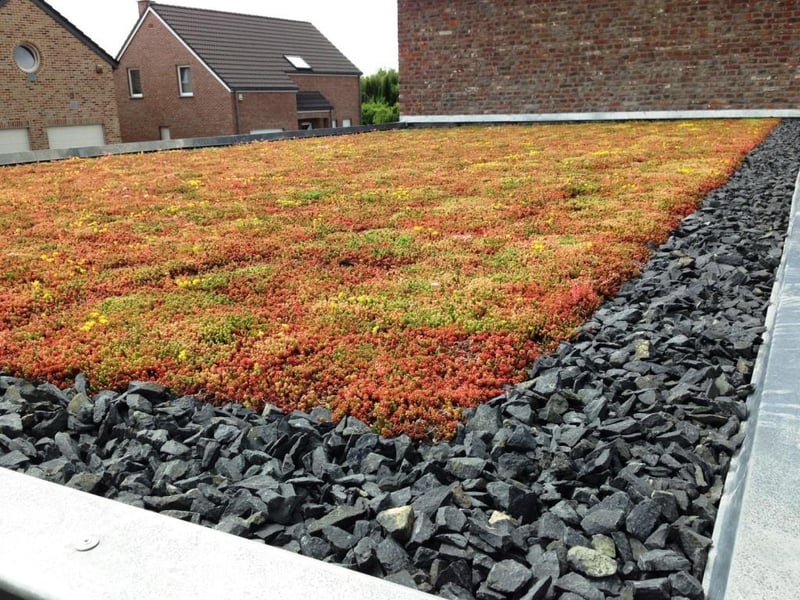 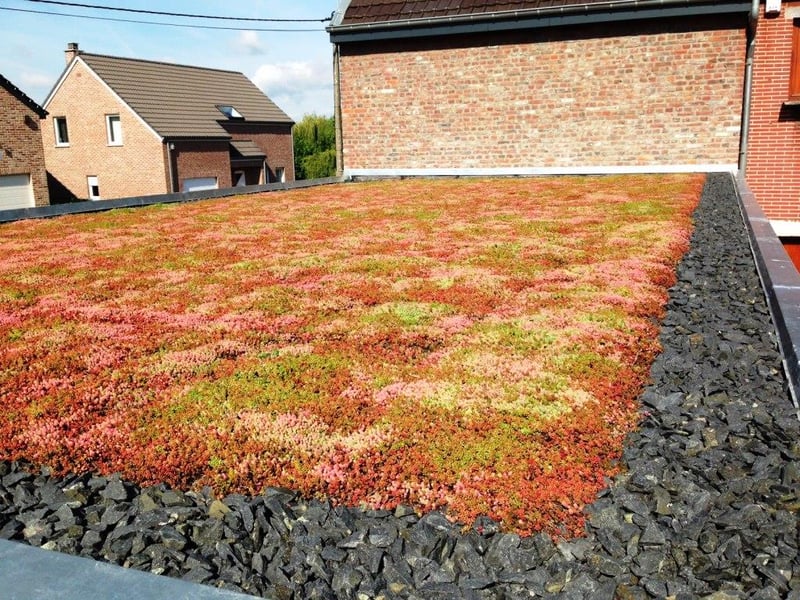 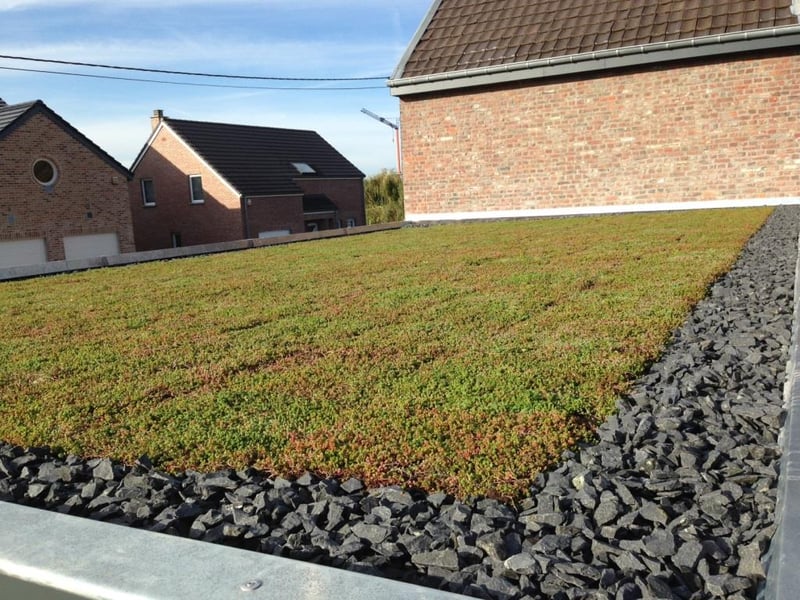 Check also our video on how green roof in Belgium is changing its colours during the year.

The composition of the vegetation blankets provided in Urbanscape Green Roof Systems is dynamic and varies. Flowering occurs mainly during the late spring and summer time.

You can also send questions directly to e-mail: urbanscape@knaufinsulation.com