Our contemporary lifestyle dictates that we spend most of our time indoors. Buildings need to be kept at a constant temperature to accommodate our expectations and standards of comfort. Today, experts estimate the building sector’s energy consumption and greenhouse gas contribution to be around 40% of all emissions produced worldwide! (1). Mitigating this sector-wide problem must become our priority. Green roofs offer a valid solution by reducing the variation of indoor temperature and the energy consumption of buildings both in warm and cold climates (1). Despite common expectations, cooling costs are a very significant factor in today’s buildings, even in traditionally cooler geographic locations due to the effects of climate change, urban heat waves and increased use of electronics.

Our need for heating and cooling buildings comes from our notions of comfort that we have come to expect from indoor environments. To assess the amount of heating and cooling used, comfort temperatures must be determined. These are usually at around 21 °C in winter and 26 °C in summer (2). Therefore, the greater the disparity between the current and desired temperature, the greater the energy consumption of the building in question (2). Green roofs help buildings reduce energy consumption by affecting heat fluctuation, reducing the need for temperature adjustment by means of heating or cooling.

Heat gain is the term given to a temperature rise within a space due to heat radiation of the sun, heat given off from warm surfaces or heat originating from other sources within the space, such as heating appliances, ovens, people, mechanical systems, lights and computers. It is the additional heat that changes the prevailing temperature within the space. Heat loss, on the other hand, is a measure of negative heat transfer through a building’s fabric from the inside to the outside. This can be due to either convection, conduction, radiation, mass transfer, or a combination of those factors. The colder the outside temperature, the warmer the inside and the worse the thermal insulation of the building fabric, the greater the heat loss will be (3). To avoid higher cooling or heating costs respectively, we usually aim to reduce heat gain in summer and similarly – to reduce heat loss in winter. Researchers in Toronto, Canada, planted two different green roof systems, each with 75–100mm of lightweight growing medium. By conducting measurements they found that the heat gain through the green roof was reduced by an average of 70–90% in the summer and heat loss by 10–30% in the winter (2).

A green roof also adds thermal mass to a building, contributing to the stabilisation of internal temperatures year-round (2). Thermal mass is the ability of a material to absorb and store heat energy. It essentially acts as a thermal battery. During summer it absorbs heat during the day and releases it by night when temperatures are lower and a cooling breeze can help diffuse the warmth, keeping the house comfortable. In winter the same thermal mass can store the heat from the sun or heaters to release it at night, helping the home stay warm (4).

Another problem buildings face in warm weather is an increase in surface temperatures, particularly on exposed rooftops. In summer the exposed area of a black roof can reach 80°C whereas an equivalent area in a green roof keeps its temperature below 30°C. Green roofs can cool off through latent heat loss and improved reflectivity of incident solar radiation. The ratio of total reflected versus incident electromagnetic radiation is defined as albedo. Some data suggests that green roofs can cool as effectively as white roofs, with an equivalent albedo of 0.7–0.85, compared with the typical 0.1–0.2 albedo of a bitumen/tar/gravel roof.

The questions of context and coverage

The impact on energy consumption in buildings with green roofs varies according to building composition, the extent of vegetation coverage and climatic conditions. Different locations have very different needs in terms of both heating and cooling. Green roofs should be modelled in a way that increases their performance in a certain context for the best results to be obtained. A study about green roofs performed in the Midwestern U.S., with hot and humid summers but cold and snowy winters, found that building heat fluctuations were high in summer (167% variation on average) and low in winter (13% variation on average). In such cases, the study recommends increasing the depth of the growing medium layer for best results. The total surface area also impacts green roof performance – researchers working in Greece found that green roofs reduce the energy utilized for cooling between 2% and 48% depending on the area covered by the green roof, with an indoor temperature reduction up to 4 K (1). A study conducted in Saudi Arabia shows similar results – the impact varies according to the seasons and the surface area covered by a green roof (5). Going back to cooler climates with more extreme temperature pits and peaks - in a detailed study in Canada, it was shown that the daily surface temperature variation with a green roof was approximately 6°C, compared to a variation up to 45°C occurring with a traditional roof – providing a significant reduction in temperature regulation costs (1). 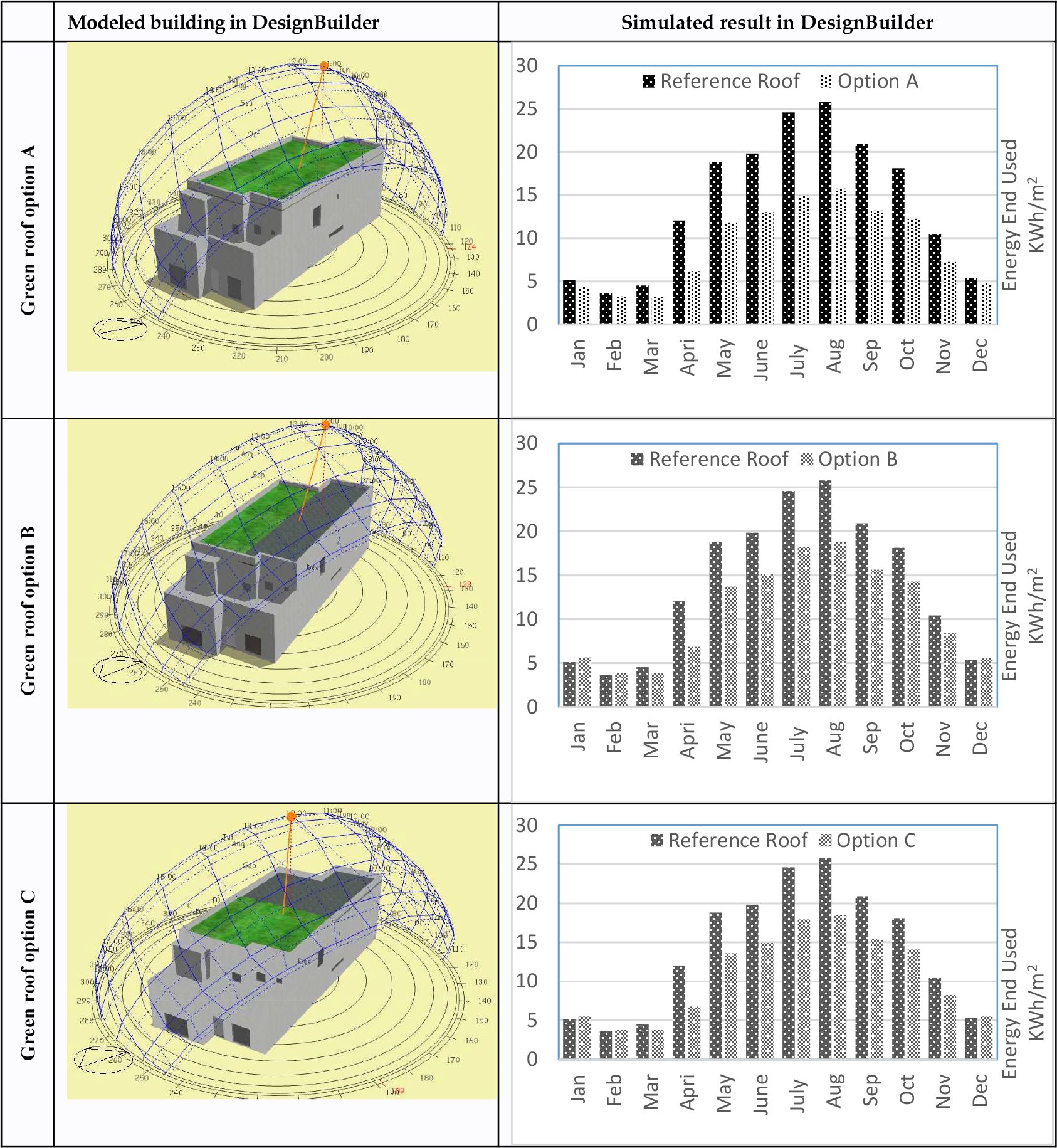 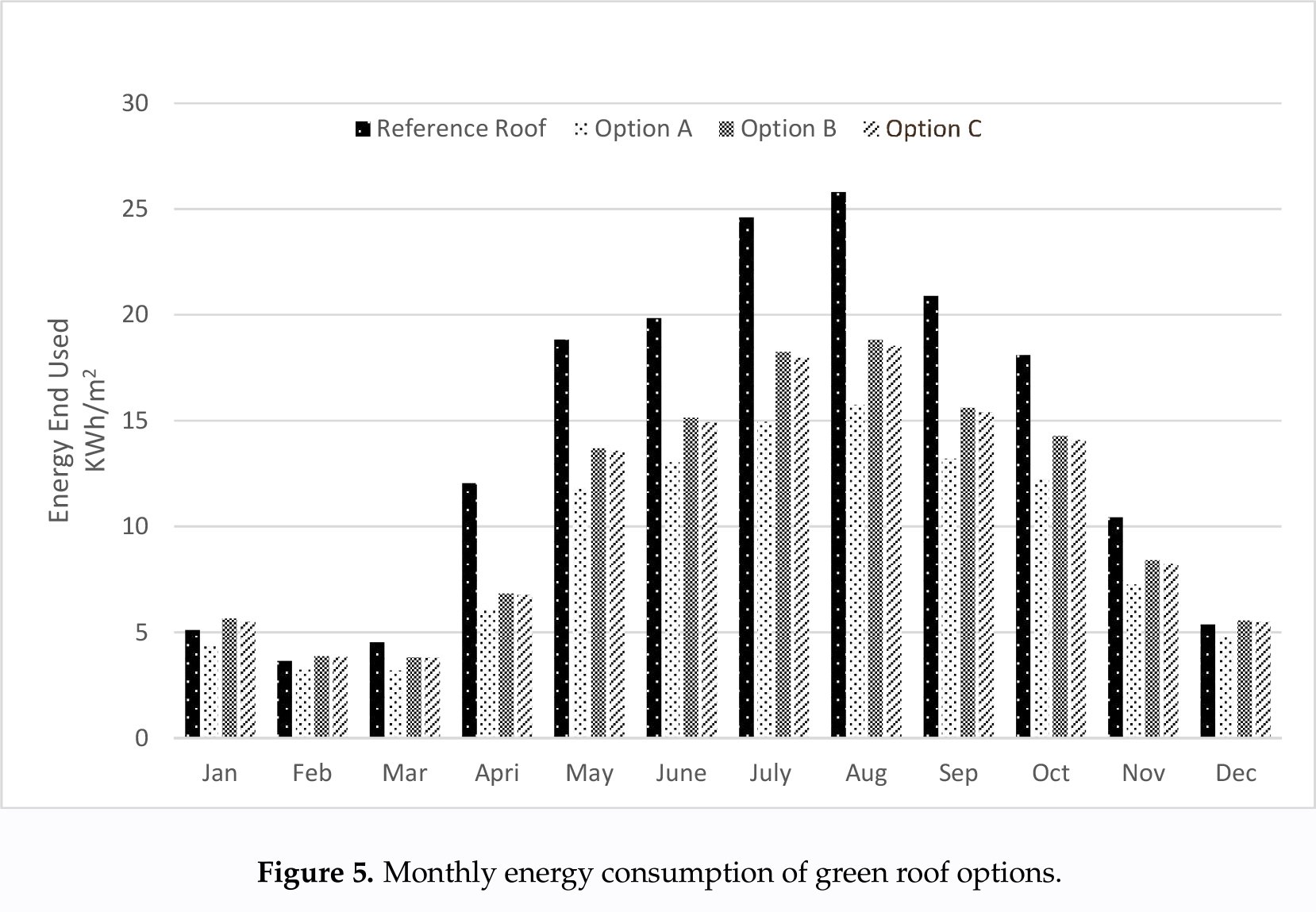 The impact of the three investigated surface areas of green roof coverage on energy consumption. (5)

The potential for retrofit

In modern buildings, good insulation levels are mandatory, however much of the existing building stock in Europe fails to meet the criteria expected today. Therefore the additional insulation of a green roof would result in better energy savings for less well insulated, older buildings. In countries where the replacement of building stock moves at a slower rate, it is crucial to explore this option, as older buildings can be even more prone to having insufficient insulation or other qualities that can impact temperature regulation. In the UK, for example, half of the existing 23 million homes are more than 50 years old – a trend that is surely also found elsewhere in Europe. Currently, the rate of demolition and replacement of the UKs building stock is too low to combat climate change by improving the quality of new developments alone. Retrofitting existing buildings could, however, contribute to mitigating the problem (2). Not only private homes, business facilities can benefit greatly from a green roof as well. Commercial and institutional buildings are normally repaired or refurbished every 15–20 years. This provides a great opportunity for the building owner to install a green roof and capitalize on the benefits. The additional loads associated with an extensive green roof (typically about 120–150 kg/m2) do not require any additional strengthening on most commercial buildings (2). The lightweight nature of extensive green roofs lends itself nicely to use in retrofitting. The installation can seem as a large investment at first, but in larger buildings, common in the case of business facilities, the reduction in upkeep, heating and cooling adds up quickly and the investment in a energy-consumption reducing green roof system is sure to repay its costs rapidly.