The world's urban population is rising and is projected to reach 67% by the year 2050. Despite socioeconomic benefits, urbanization leads to numerous environmental problems, such as urban floods and higher inner-city temperatures compared to the surrounding rural areas. Climate change further aggravates these problems by increasing the number and intensity of weather extremes (1).

Urbanization leads to an increase in impervious surfaces that do not allow water to drain, such as rooftops, driveways, roads, car parking, and footpaths. This means the natural process of filtration through vegetation and water storage in the soil is interrupted. The result is a greater volume of excess water which runs off more quickly during a given rainfall event (2).

Floods don't only represent a greater potential for property damage, they also bare the increased risk of exposure to diseases. The European Centre for Disease Prevention and Control (ECDC) warns that during floods, people in areas affected by disruptions of sewage water systems are at risk of increased direct or indirect transmission of several gastrointestinal pathogens, particularly infections caused by E. coli, norovirus, rotavirus, Cryptosporidium, Giardia, Campylobacter, different Salmonella enterica serotypes, Shigella, and hepatitis A. Other diseases such as leptospirosis and tetanus may also occur more frequently (3).

Excessive runoff resulting in urban flooding is most pronounced in densely built downtown areas, where limited available space and high land value hinder the implementation of some ecological structures (4). Roofs, however, represent a large proportion of the city surfaces and can often be used even where space is at a premium.

Sustainable drainage systems (SuDS) are designed to manage stormwater as close to its source as possible to mimic natural drainage. SuDS essentially operate through infiltration where possible and attenuation - loss of flux intensity through a medium, combined with slow conveyance - the gradual transfer of runoff water. SuDS are designed to both manage the flood and pollution risks resulting from urban runoff and to contribute to environmental enhancement (5). Green roofs are one of the most well-known SuDS today, applicable in nearly all locations and climates. They are designed to intercept and retain precipitation, reducing the volume of runoff and attenuating peak flows (6).

Traditional stormwater management systems rely on directing all stormwater to the sewer which takes it to nearby water bodies. On the contrary, green roofs are designed to capture, temporarily retain and infiltrate stormwater. They harvest water at the source, encouraging gradual evaporation, evapotranspiration and the re-use of stormwater (2). In contrast to a conventional roof where the vast majority of rainfall flows off, rainwater landing on green roofs enters a complex hydrological system The system retains water in vegetation, substrate and layered materials, thus providing runoff retention that allows for better stormwater management (1). Rainfall entering green roofs is partly stored in the substrate and taken up by plants, partly returned to the atmosphere via evapotranspiration and partly discharged as runoff (4).

The advantages of green roofs over many other SuDS are that they can be applied in high-density developments and can be installed as a retrofit provided the site allows it. This way, they do not take up additional land surface. At the same time, they have been known to improve air quality, help manage the urban heat island effect and insulate buildings against temperature extremes. Green roofs also reduce the expansion and contraction of roof membranes and provide a measure of sound absorption (6). This is why cities around the world are embracing green roofs as part of their stormwater management plans and have begun to introduce incentives, such as subsidies, low-interest rate loans, and tax reductions (9). 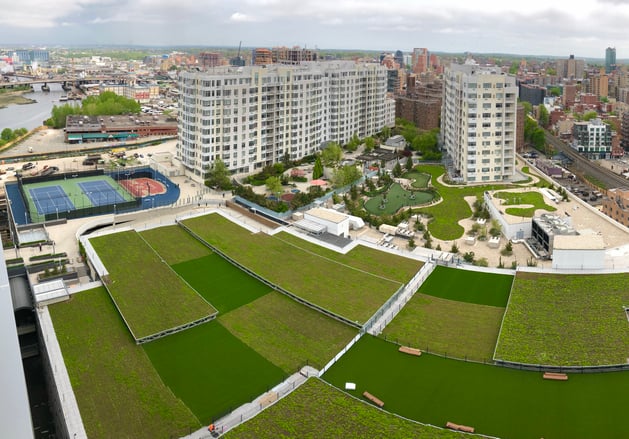 Green roofs could also help us achieve better purity of runoff water. Studies show that conventional roof drainage does not comply with standards for drinking water and that pollution associated with particles in runoff contributes to its toxicity and sedimentation. Metal roofs are a source of cadmium and zinc, and the asphalt used in roofing felt is a source of lead in the water flowing from the roofs. In contrast, green roofs are a solution that can have a positive impact on improving water quality, aiding filtration through the vegetated layer as well as the substrate layer (7). An investigation was conducted on dual-substrate layer green roofs in Tianjin, China, including a nutrient substrate as well as an absorption layer. They found that green roofs could effectively neutralise acid rain to pH values between 8.25 and 8.63, which achieved the standard V (pH 6–9) of the Environmental Quality Standards for Surface Water. This neutralisation is an important environmental benefit that contributes to lowering the degree of water acidification (8). Through natural biofiltration, green roofs also prevent contaminants and toxins from reaching streams and waterways. According to Kohler & Schmidt research (1990) 95 % of lead, copper and cadmium sulphides, and 19 % of zinc coming from the rainwater remain in the substrate, helping to improve the local water quality (10).

There are many factors to be taken into account when constructing a green roof for a specific building and location. Experts should always be consulted to achieve the best results. Generally, when comparing intensive and extensive green roofs, intensive roofs have better retention properties due to the thicker soil layer and the presence of various plant species, including trees and shrubs. However, due to their enormous weight, they are often unsuitable for installation on existing buildings (7). In the case of a retrofit, extensive green roofs have the advantage due to their low weight, making them easier to apply to existing buildings. 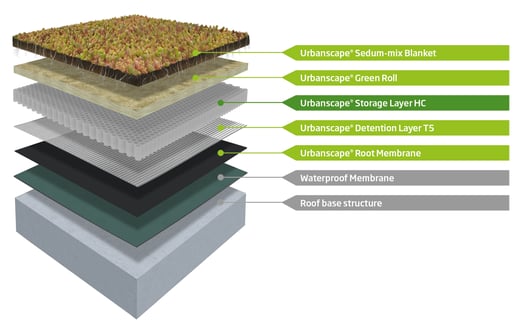 (6) Susdrain, The community for sustainable drainage