The design of buildings has evolved over the years, but the function of buildings has remained remarkably constant: protection, comfort, warmth in winter and coolness in summer. In recent years, however, the environmental impact of buildings and green solutions are becoming increasingly important.

Why are green roofs important? 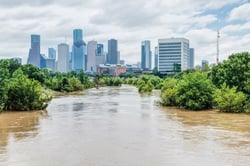 They are designed not only to bring back the natural element in the urban environment but also to provide solutions for important issues such as urban heat island effect and stormwater management. Vegetated surfaces in cities help reduce the amount of dangerous smog in the air. Furthermore, they act as artificial habitats for various small animals and insects.

Green spaces particularly gardens, were also found to be beneficial to the health and well-being of the elderly, especially those suffering from dementia. The World Health Organization’s regional office in Europe recently drew up a report highlighting how increased urban greenery — such as “street trees, green walls and roofs” — in certain European streets led to lower rates of antidepressant prescriptions.

How do green roofs work? Will they work in any climate?

Local climatic conditions must be taken into account when planning green solutions. Results may differ from one climate area to another. However, studies have consistently confirmed that green roofs provide significant advantage in just about any climate. They have scientifically confirmed the capacity of green roofs to intercept both smog and solar radiation and work to facilitate cooling, observing significant differences surface temperatures.

And there are plenty of Urbanscape® green infrastructure examples all over the globe, that have been widely approved by both the architectural community and the users that encounter them in daily life:

Our biggest Urbanscape® green roof is located in France — an 8,300m2 installation that will save almost two Olympic-sized swimming pools of storm-water every year. Find here complementary information on this project. 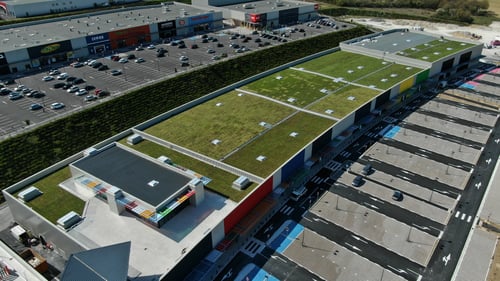 SLOVENIAN PAVILION AT EXPO 2020 IN DUBAI

The Slovenian Pavilion and its Urbanscape® SemperGreen wall is unique for its lush green impact in a desert environment like Dubai, UAE. With a total surface of 460 m², it is by far among the biggest projects in the MEA region. The Green Wall counts about 1500 installed green wall panels (30 are custom made) and 45.000 hand-planted local plants selected by the client.

An extensive green roof, which turns into an extensive green wall without compromising neither the architectural design, nor the health of the plants. An area of more than 6000 m² has been built, applying Urbanscape® Green Roll and Urbanscape® ECOSE Technology® Green Wall boards. More information on the project is also available here.

This slightly different roof surfaces create a barely noticeable asymmetry in the otherwise very rhythmic and stringent exterior, which immediately becomes an eye-catcher. On average, Urbanscape® Green Roof System is much lighter than other regular green roof, so it can be installed also on lightweight constructions and to differently shaped and inclined roofs, what the HUF “Ausblick” house absolutely has, where traditional green roof systems are not possible. 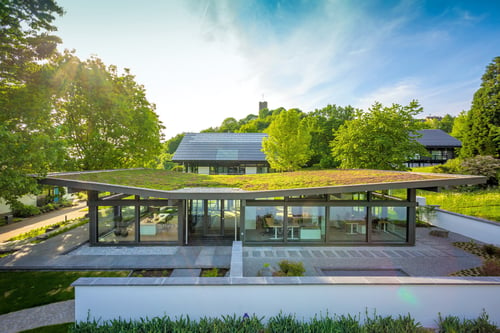 To find out more, please refer to Urbanscape® research projects to gain more information about possibilities for green roof optimization in any climate and context.