The combined effect of urban growth and climate change is altering the hydrological balance in developed urban areas. Public awareness of the impact of stormwater on flash flood occurrence and water quality is, however, on the rise (1). The surface of roofs in urban areas account for approx. 40–50% of the total sealed areas in cities. This means the potential for introducing green technologies is very significant (2). At the same time, climate change is causing more frequent short and intense rainfall events, alternated by long, hot, dry periods. This is why water management systems need to deal with pluvial flood risks during intense rainfall events and at the same time, cope with water supply system stress during long, hot, dry periods. Green roofs are strategic tools that can play a significant role in the creation of sustainable and resilient cities due to their high retention capacity and contribute to better water detention. Green roofs are therefore a promising tool that can support better water management in urban areas (3). Rooftop retrofitting with green roof systems has shown multiple benefits not only in terms of urban hydrology but also in terms of energy-saving, general building physics and biodiversity (1). 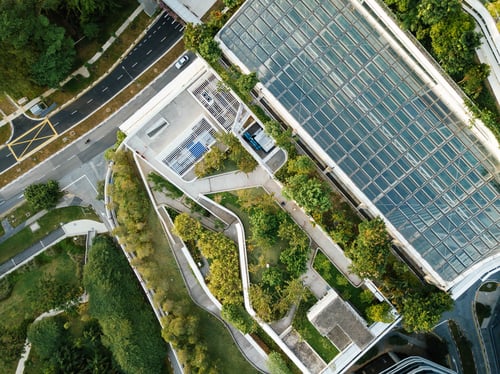 Green roofs can have a significant impact on the mitigation of negative urbanization effects and ensure sustainable urban development. Blue-green roofs, in particular, can prove to be an effective instrument due to the fact they act also as a rainwater harvesting system. They include a water tank, which enables rainwater from the soil layer to be harvested and stored. Collected water can be later used for several purposes, such as irrigation of the green roof itself. Taking into account the harvested water quality, it is possible to evaluate different options for reuse. Some contamination can still occur, however, the concentration of water contaminants in green roof runoff is still much lower than in runoff generated from common rooftops. According to quality and subsequent treatment, collected rainwater can be used for different domestic purposes, such as home garden irrigation, washing cars or flushing the toilet – uses that usually exploit drinking water resources. The pressure on the water supply system could thus be reduced, promoting sustainability and better access to drinkable water for everyone. Research indicates that the water-saving reaches 38–65% for water tank sizes within 1–50 m3. Water collected in the storage layer can be sprinkled on the streets during the hot and dry days, contributing to the cooling of the temperature. This traditional Japanese technique, called Uchimizu, can decrease air temperature by up to 6 °C for near-ground level (3).

The detention capacity of water harvesting techniques can also be used to mitigate pluvial floods. A flooded area can be reduced by up to 35% for rainfall events with a depth of up to 50 mm, by installing rainwater harvesting systems. The composition of a green roof characterizes the green roof retention capacity water detention – the growing medium and other potential water-retaining layers play a significant role. Plants are also a contributing factor – hardy species such as sedum are common in green roofs since they have shown good retention and detention performance during rainfall events and they are quite resistant to dry periods (3).

Green roofs are also emerging as an increasingly popular part of the Sustainable Urban Drainage Systems (SUDS) technique for urban stormwater management (4). SUDS replicate the natural drainage cycles, usually through the use of vegetation-based interventions which increase infiltration, such as swales, water gardens and of course - green roofs (5). Therefore, they present a natural and sustainable way of water management. By retaining access water, they allow a significant reduction of peak flows and runoff volumes collected by the drainage system, with consequent reduction of flooding events and water pollution that occurs in such events. Put simply – by retaining a volume of water they prevent drainage systems and sewers from overflowing and delay and/or reduce any potential flooding. Studies suggest that green roofs can reduce stormwater runoff in comparison to conventional roofs with volume retention scores of 40–80% of the total rainfall volume. Some experts even note that a decrease of 60–80% in runoff peak rates can be expected from a green roof – this however also depends on the climate and other conditions (4).

Proverbially wet, a major threat within the UK is the increased risk of surface water or pluvial flooding. With ever more frequent extreme weather events due to climate change, the conventional approach of diverting runoff to an outfall has proven to be unsustainable during severe storm events. During the winter of 2013/14, twelve major winter storms occurred, resulting in more than 5000 homes, businesses and infrastructure being flooded in Southern England. Green infrastructure, in the form of Sustainable Urban Drainage Systems (SUDS), has been proposed as a means of minimizing the risk of urban flooding (5). In the case of the UK, green roofs have the potential to help retain water and release it gradually into the sewer system, preventing overflows and water source contamination that can occur in flood events.

From the end of the 1980s, average temperatures have risen rapidly, faster than the global average. The French Alpine glaciers have shrunk and the glaciers in the Pyrénées are showing the same trend. By 2050, assuming a stable individual demand, an increase of 2 billion m3 in water supply will be required to meet the current needs of industry, agriculture and households. At the same time, the reduction in the number of water resources, coupled with a potential increase in anthropogenic pressure due to demographic growth, could have significant impacts on the quality of the water available for use (6). This is why the use of green infrastructure, for example, green roofs, presents an important step towards a more sustainable future with more efficient water management to avoid the potential risk of water shortages and the devastating effects of a drought that can affect crop production.

Despite the general consensus that green roofs have the potential to play an important role in climate change, there is no Europe-wide homogenous attitude towards these solutions. Different types and scopes of incentives are provided. Germany was the first country in Europe to introduce formal initiatives aimed at supporting the construction of green roofs as early as the 1970s. They provide various incentives, such as subsidies, rainwater and snowmelt disposal fee reductions, tax allowances, as well as running promotional programs and adopting favourable legislation. In the last few years, the amount of green roofs in Germany has increased by a staggering 13.5 million m2 each year. In Denmark, the successful implementation of the adopted incentives also leads directly to the realisation of green roofs. Including them in local spatial development plans enabled the construction of 200,000 m2 of green roofs in Copenhagen only in two years – from 2010 to 2011 (2).

In the case of France, legislation is catching up. Since the year 2015, all new buildings in commercial zones are required to be partially covered by either green roofs or solar panels (2). The incentive is therefore a legal requirement. In The UK, provisions have been made in the Climate Change Adaptation Strategy set requirements, that state green roofs must be implemented on all new buildings in London’s Central Activities Zone policy area (2). Therefore, both France and the UK have demonstrated an accepting attitude towards green roof implementation and are willing to legislate in favour of them. It could be argued, however, that diversifying the types of incentives, such as those seen in Germany, that includes financial support or cost reduction, would contribute to the wider implementation of green roofs.

The trends are generally favourable and with the collaboration of governments, municipalities, various organisations, companies and the public, green roofs have the potential to become widespread and help mitigate the negative effect of climate change and contribute to better water management regimes all across Europe.