Lessons at Piali Ashar Alo primary school for girls in Kolkata, India, used to be challenging.

Like other buildings in the area, the school relies on ceiling fans, open windows and a handful of air-conditioning units to keep rooms bearable during the hot summer months.

Summers are particularly hot and humid. During dry spells, maximum temperatures often exceed 40°C in May and June. And, as if the heat was not enough, summer squalls often blow in dust during dry weather, heavy rain deluges the region during the rainy season and in winter, temperatures dip to 9ºC. 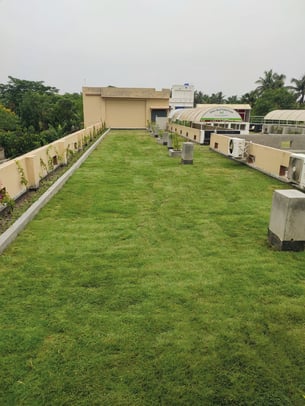 When Knauf Insulation experts assessed the building with a view to improving the youngsters’ class comfort, it became clear that installing external wall insulation would not be the best way to cool the building as windows are usually left wide open, doors in classrooms are non-existent and the high elevation of the sun was keeping upper levels continuously hot.

The optimal solution was to upgrade the raw concrete flat roof with an appropriate heat-protecting solution.

Knauf Insulation’s Head of Building Science, Domen Ivanšek, says: “The flat surface of the 10cm thick concrete roof was constantly hot, overheating the rooms below, and it was covered with a latex waterproof layer that was coming to the end of its life.

“However, the roof could be walked on, and when the head of school said she wanted to provide the children with a place to learn about gardening and botanic science it was clear that an Urbanscape green roof was the best solution all round.”

Due to the challenges of the pandemic, the initiative had to be run remotely online by Domen, Marketing CTN & PA SD Director Barbara Hafner, the technical sales support and Urbanscape teams in Slovenia and the founders of the school, Slovenian Mojca Gayen and her husband Anup Gayen, along with Indian partner Smart infrastructure solutions and local installers who were involved in the project from conception to completion. 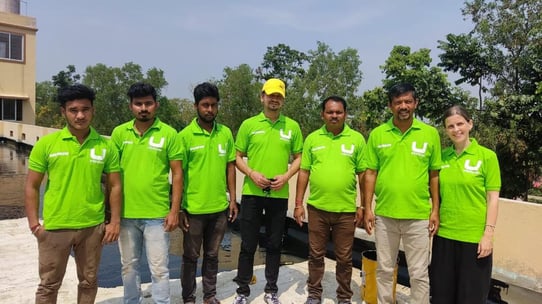 The Knauf Insulation team created, financed and delivered the materials for the custom-designed 600m2 green roof and oversaw its installation remotely with the local teams. 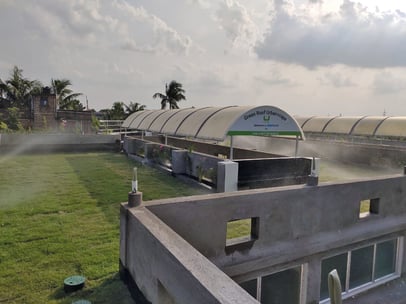 The customised school roof now features a root-resistant two-component waterproof layer, a drainage layer as well as a 2cm layer of Mineral Wool Urbanscape green roll to absorb and hold water as well as nurture plant roots. An additional 10cm of soil was then added on top with an irrigation system.

Walkable grass blankets were then installed on the roof along with planter beds for ornamental plants and fruit growing.

“Our Urbanscape roof enables passive cooling on the building by evapotranspiration, limiting the entry of heat and ensuring the temperature for the children and teachers in the school is much more comfortable than before.”

Research by Knauf Insulation’s building experts found that the amount of energy needed to keep the rooms comfortable at 24ºC would be cut by 82% by the green roof compared to the original grey concrete, if those rooms were air conditioned.

By limiting the amount of excessive heat coming into the building thanks to the vegetated and insulated building envelope, less energy is needed for air-conditioning to create a comfortable temperature and emissions are lowered.

The upgrade is good for the building users’ budget, good for the urban electricity infrastructure, which can struggle in summer heat peaks, and great for the environment.

The green roof also acts as a protective layer for the roof, protecting against ultra-violet rays, mechanical defects and deformations caused by high temperatures as well as absorbing pollution particles. 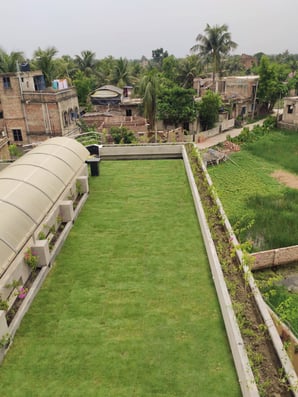 During heavy rains, the roof can also retain water which prevents deluges of rainwater flooding the sewage system. Our Urbanscape team calculations, based on historical local climatic data and the measured water retention performance of our Urbanscape solutions, found that 47% of rainwater will be retained, reducing the need for extra irrigation.

Barbara Hefner, Knauf Insulation’s Public Affairs Director in Slovenia, who played a key role in the project’s international coordination, says: “I think what is equally significant about this project is that we provided a unique outdoor classroom where children can play and learn about plant life as well as having hands-on understanding of the impact of climate change and the importance of making buildings more resilient.”

Knauf Insulation’s work with the school is in line with the company’s For A Better World strategy which is committed to putting People First and supporting local communities through charity and voluntarism.