How green roof can tackle the devastation of urban flooding

Flash floods are becoming more frequent causing devastation in urban centres with antiquated sewage systems. And how can Urbanscape® help ease the misery of flooded cities?

On July 13, 2021, London endured a month of rain in just one day bringing parts of the city to a complete standstill. 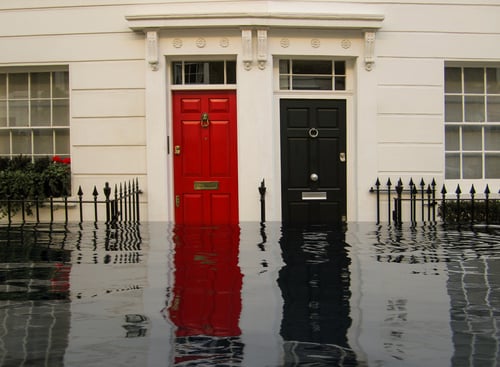 Rail links were closed, roads and motorways were waterlogged, cars and buses were abandoned, shops, restaurants and offices deluged and hospitals had to evacuate patients when flood water caused emergency power outages.

London was not the only major city to suffer flooding that month. Three days previously, New York was also hit by severe flash flooding, causing drainage systems to overflow and forcing commuters to wade waist deep through subway stations.

Then tragedy. In the last two weeks of the month floods killed 302 people in China’s Henan province and in Europe 196 died as intense stormsswept across Belgium, the Netherlands and Germany.

‘Drain systems are too old to manage floods’

Severe flash flooding is becoming increasingly common around the world and concentrated urban areas in particular are completely unprepared for their impact, say scientists.

Dr Harvey Rodda, University College of London’s Department of Earth Sciences, says: “The drainage infrastructure in London has a part to play in surface water flooding. Many surface water sewers are old, have not been designed on hydrological studies and are under-capacity.”

In addition, many urban areas have developed more hard surfaces than ever before. In the UK, for example, one survey reported more than one in 10 British gardens had been paved over to create a parking space.

Commenting on subway flooding in New York, the city’s Interim Transit President Sarah Feinburg says: “Concrete does not absorb water. The water comes through vents, downstairs in waterfalls, and then if drains cannot handle the water, it goes over the curb and makes things worse.”

So, how can we adapt our urban areas to be more resilient to extreme flooding? Green roofs are a highly effective solution.

Jure Šumi, Knauf Insulation’s Green Solutions Advocacy Lead, says: “Today is the United Nations’ World Water Day which every year focuses on the sustainable management of our most precious research.

“This is the perfect opportunity to call for a mass overhaul of water management infrastructures, encourage more green spaces such as gardens and parks and redesign buildings to make them more resilient by incorporating green roofs and walls to absorb intense stormwater.”

“To put that into perspective, an 8,300 m2 Urbanscape® Green Roof System we installed on a retail building in France is capable of capturing almost two Olympic-sized swimming pools of storm-water every year.” 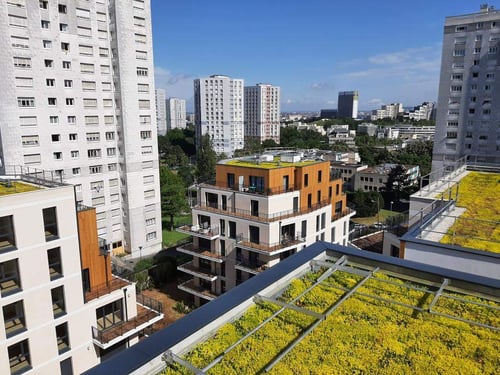 Dozens of cities have already adapted measures to increase the amount of green infrastructure on their buildings from Singapore and Amsterdam to Chicago and Toronto. In Copenhagen, green roofs have been mandated in local plans since 2010.

In the words of the Danish capital’s green roof report, “Green roofs cool our cities, enhance biodiversity and reduce rainwater runoff. They also bring beauty to what otherwise can be very grey places.”

Jure adds: “The number of severe storms is increasing, our urban infrastructure is creaking at the seams and the surface of roofs in urban areas accounts for up to 50% of total sealed areas in cities.

“We have an unmissable opportunity to introduce more green infrastructure and make a significant contribution to urban flood water management as well as help restore the natural water cycle which has been disturbed by uncontrolled urbanisation.”